A young family had a lucky escape after their terraced home collapsed in the middle of the night as builders carried out work on the land next door.

Neighbours were woken in the middle of the night as an entire wall came crumbling down, sending bricks, mortar and the family’s belongings hurtling into the street.

Panicked residents called 999 at about 2am today amid fears that the family who lived in the house with young children may have been trapped inside.

It has since been revealed the family were not at home at the time, having left the property hours before after a smaller section had collapsed at about 3.45pm.

Two of the children’s bedrooms and the kitchen were destroyed as a result of the collapse, while the roof also appeared to be completely wrecked.

A family friend revealed that the children had lost most of their possessions in the collapse, and all that they had left was their ‘uniforms and school bags’. 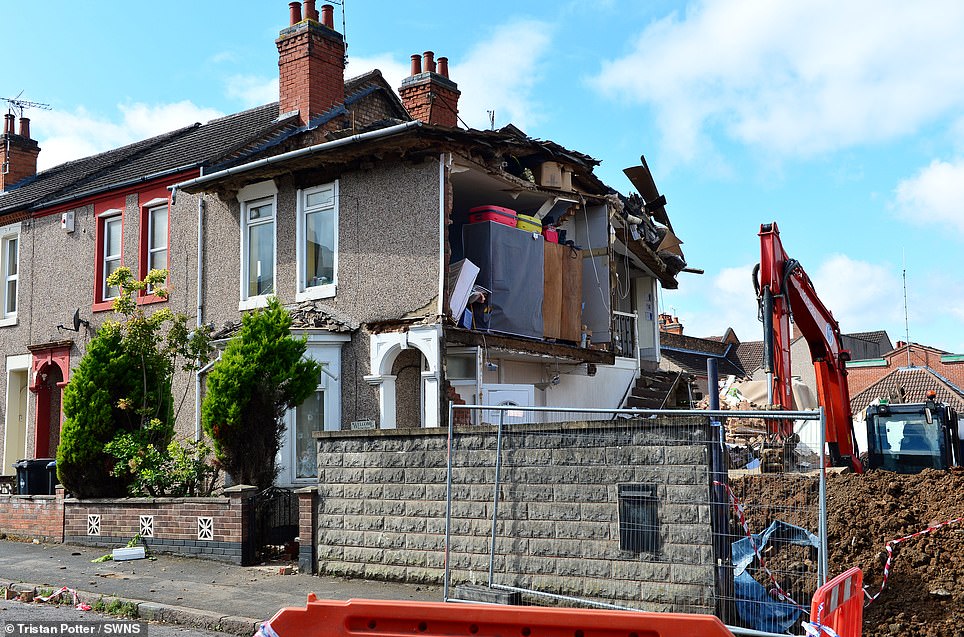 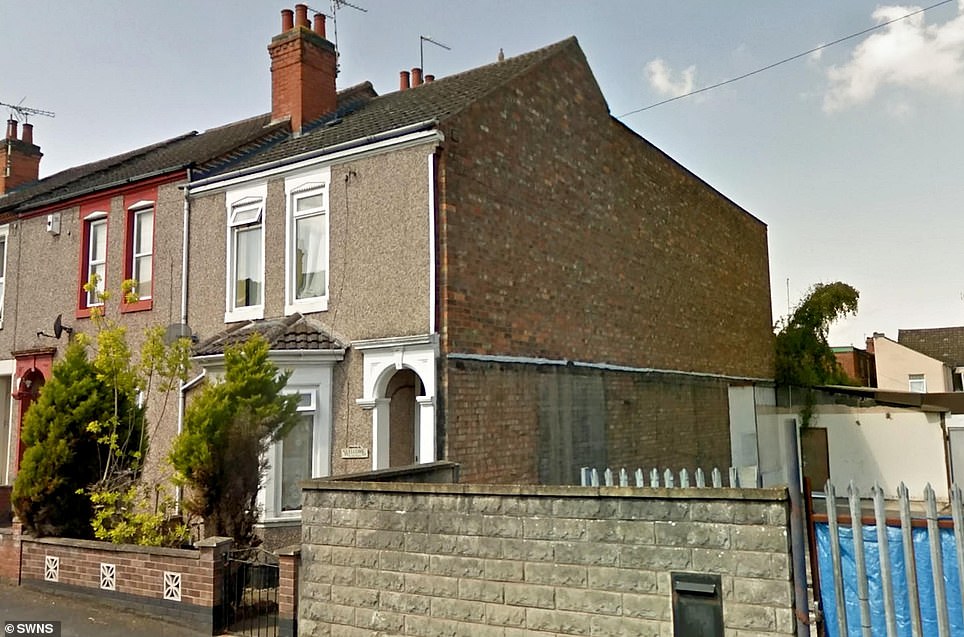 An aerial photograph taken this afternoon shows the level of destruction caused by the house collapse, which occurred early this morning

Neighbours revealed building work was being carried out to convert the neighbouring house into flats.

Resident Melissa Branch, 49, said: ‘There was a lot of dust and I could see a lot of rubble from my back garden.

‘The builders began working on this last Sunday. There was loads of noise and stuff going one. I don’t know how well controlled it was.

‘The residents have their whole life in there. They have lost their home. There was a smell of gas in the street as the boiler came off the wall. Its quite a hazardous area at the moment. Its lucky no one was hurt.

‘I saw the tenants in the morning and they were looking at the damage. They looked really upset and devastated. Our neighbours are now without a home. Something has happened for this to occur.

‘I was in America on 9/11 when the towers came down and you think about the amount of dust there. We had that much dust from that little bit of the house. You can only imagine.’

Another neighbour Terry Deery, 58, added: ‘I came out of my house to go to the bank and saw people running across the road.

‘I heard the crash and three builders came out. They were calling for another builder still in the house. One minute later he came out.

‘The builders then were knocking on the neighbour’s doors to see if anyone was in or in danger. Then 20 minutes later emergency services arrived.’

Martin Pitcher, director of Life Investments Estate Agents, which manages the property, said: ‘The tenants have lived there comfortably for three or four years and the house has been standing for 130 years.

‘We are working with the tenants who are very shocked at what has happened. Groundworks were being carried out on the property next door, which was being redeveloped privately. We have found the tenants new accommodation.’

Other neighbours described the noise like ‘sounding as if a bomb had gone off’ as brick and mortar fell to the ground.

Laura Evans, 33, said: ‘I just heard this almighty bang, like a bomb going off and could see dust rising into the air. It was pretty scary.’

Warwickshire Fire and Rescue Service and Warwickshire Police attended the scene to secure the area and put road closures in place.

A photograph reveals wardrobes and travel suitcases from one of the bedrooms, as well as boxes in the attic which have been squashed by the collapsed roof 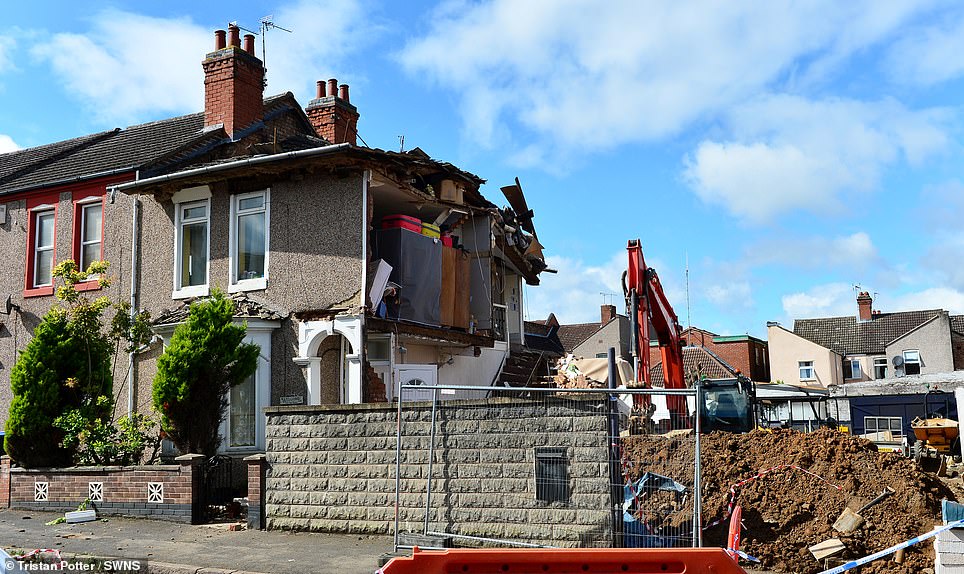 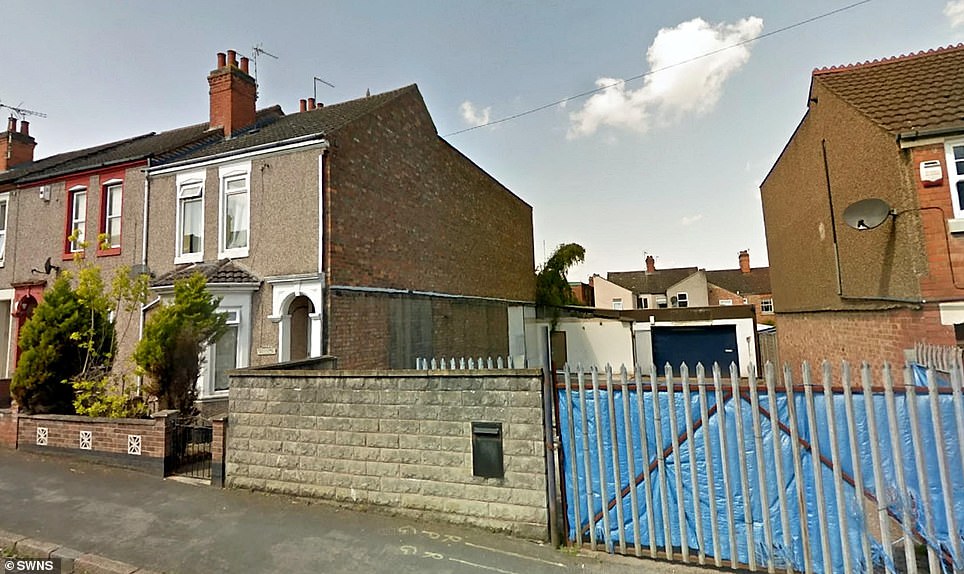 Police tape surrounds both the house and the building site next door to the home in Rugby, Warwickshire this afternoon following the early-morning collapse

It has since been revealed the family were not at home at the time, and have been placed in a hotel as an investigation is carried out into what caused the collapse.

Structural engineers have also attended to examine the property after Rugby Borough Council launched an investigation.

One family member, who did not wish to be named, said: ‘It was a shocking experience and no one is accepting liability.

‘Our landlord is confused what is covered by his building insurance and the contractor doesn’t want to accept liability.’

A fundraising page has been launched for the family by a friend, which has so far raised £320. The friend of the family wrote: ‘The children only have their uniforms and school bag with them.

‘Imagine their shock coming from home from school seeing their house in ruins. They are renting and do not have content insurance, not many people who rent think of this.

‘Araial and Mel are close friends and have at some point they have helped us when we are in need. I always say that one of their greatest trait is to make everyone they come across feel that they are friends and family.

‘I personally know them for half of my life and consider them as my extended family. Knowing them, I am certain their faith in our God will see them through this crisis in their lives.

A poignant sign outside the wrecked house reads ‘welcome to our home’ (shown left), while another image reveals the damage caused to the property’s staircase (right)

Neighbours were woken in the middle of the night as an entire wall came crumbling down, sending bricks and the family’s belongings hurtling into the street

‘Let us rally support for them and their family at a time of their greatest need. God bless you all and thank you for your generosity.’

A spokesman for Rugby Borough Council said: ‘Officers from Warwick Building Control arrived on site at a property in Claremont Road at around 7pm yesterday after receiving a report a two-storey extension on a terraced property had collapsed.

‘Warwickshire Fire and Rescue Service, and Warwickshire Police attended the scene. The area was secured and a partial road closure put in place.

‘At 2am this morning, the gable end of the property collapsed. The property was empty throughout and nobody was injured.

‘Officers from Warwick Building Control have launched an investigation into the cause of the collapse and have a site meeting with a structural engineer this morning to assess the property.’

A spokesperson for Warwickshire County Council said: ‘We can confirm that the only road closure currently in place is that of Claremont Road, between the junction of Wells Street and Tom Brown Street.’

‘At this time we are unable to confirm the length of the closure. We will however be liaising with building control officers until such time the property is deemed safe.

‘In addition to the above, we are also arranging additional Traffic Management including heras fencing to improve the cordon around the collapse.’

A spokesperson for Warwickshire Police spokesperson confirmed they attended the scene but added: ‘We don’t believe there was anything suspicious about the incident.’

Mental Health Awareness Week: How to make the most out of online or telephone therapy

The Simpsons creator Matt Groening has final word on Apu

‘Does someone need to die?’ The families whose homes have turned into Britain’s earthquake...

Jedi: Fallen Order game review: More like, the Force goes back to sleep

Insert sad Wookiee noise here — EA finally releases a single-player Star Wars game, but promising intro falls apart. Sam Machkovech - Nov 15, 2019 4:59 am UTC If you do nothing but look at images of this game in action, you'll wonder why I have anything ho-hum to say. At its best, Jedi: Fallen…

Even the Tories aren’t ready to fight a general election. Boris...

47 funniest movie taglines of all time

Boeing’s Starliner problems may be worse than we thought